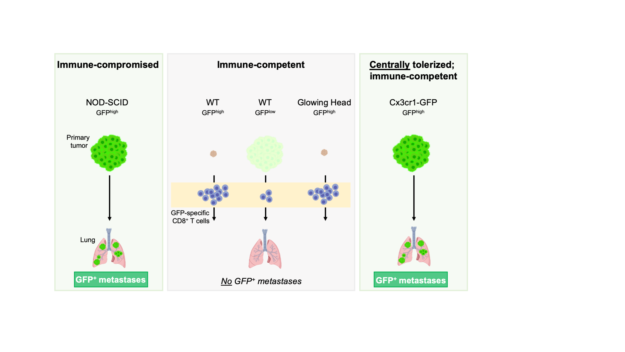 Dr. Candice Grzelak began her postdoctoral research in Dr. Cyrus Ghajar’s lab, part of the Public Health Sciences and Human Biology Divisions, working to understand how breast cancer cells travel to the liver to remain dormant (“dormant”) or to develop. to form metastases. Wanting to study the role of the immune system in this process, she used mice with a functioning immune system and injected them with breast tumor cells expressing green fluorescent protein (GFP). GFP and other shiny proteins come from organisms such as jellyfish or fireflies and are used as tools by biologists to easily track the movement and growth of cancer cells in mouse models. There was just one big problem: the injected tumor cells expressing GFP did not form GFP+ metastases in immunocompetent mice. The Ghajar lab realized that this metastatic inhibition was due to the immune system attacking these cells – not because it was necessarily fighting the tumor antigens directly, but because it was attacking the cells because of the foreign GFP marker! Dr. Grzelak says this is a “massive hurdle,” not just for her research, but for any researcher who generally studies how cancer cells migrate and grow. Recognizing this obstacle to studying cancer metastasis, Dr. Grzelak took a detour from her original plans and embarked on a journey to find a solution to this issue of immune tolerance to GFP. In their recent article published in cancer cellDr. Grzelak and Ghajar’s team overcame this problem by tricking the immune system into believing that GFP was a natural mouse protein by using a mouse that was centrally tolerated to GFP.

One of the first hints that the immune system was the culprit in preventing the growth of GFP tumor cells was when they observed that GFP-labeled cells readily metastasized in mice with compromised immune systems. On the other hand, if the metastases did form in mice with a competent immune system, the tumor cells tended to lose expression of GFP. This finding supported immune selection against cells expressing GFP specifically, rather than against tumor cells more generally. Consistent with this notion, the authors observed that injection of GFP-labeled tumor cells was accompanied by a robust GFP-specific T cell response. Ghajar’s team wondered if they could simply dampen the specific response to GFP by lowering GFP levels. Here they asked whether the reduced expression of GFP was sufficient to allow progression and metastasis. Unfortunately, the solution was not so simple as the authors found that tumor cells expressing low levels of GFP still did not form metastases.