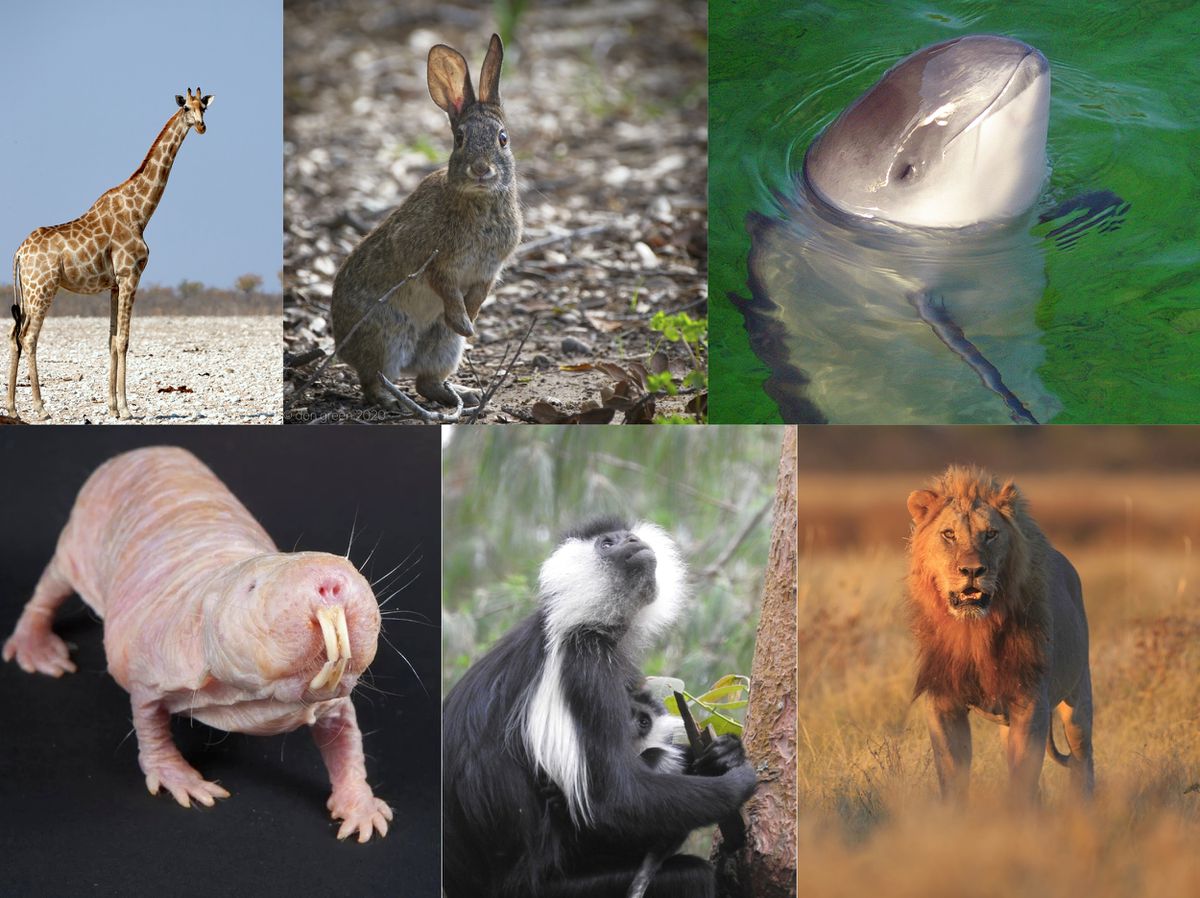 Giraffes that weigh up to 1,200 kilograms accumulate as many mutations in their cells throughout their lives as naked mole rats, which rarely weigh more than 35 grams. Likewise, living things as long as humans and as short-lived as rats come to the end of their days with a similar number of changes in the DNA of their cells. Recent research comparing different mammals shows that there is a kind of natural law that links the life expectancy of each species to mutagenesis. This connection could shed light on processes as complex as cancer or aging.

Since the 1950s, many scientists in the field have linked aging to various processes of cellular deterioration. One of these processes is somatic mutation. These are genetic modifications, between 20 and 50 per year in humans, which occur in the life cycle of the cell. They occur in healthy cells, although some of them can trigger tumors or other alterations. Occurring at the cellular level, somatic mutations are expected to be related in some way to body mass and life expectancy. The reason a correlation with the first would be expected is that in theory, the larger the mass, the greater the likelihood of cancer developing in a cell. On the other hand, if mutations play an important role in aging, they would theoretically have a link with life expectancy. Researchers from the Wellcome Sanger Institute (UK) specializing in genomic research therefore decided to study these genetic alterations in 16 mammalian species, looking for patterns indicating a common basis in the decline of life over time. .

The research, published a few days ago in the magazine Nature, is new for many reasons. One is due to his comparative analysis of species that differ significantly in size, lifespan, or diet. He is also new in his analysis of somatic mutations within cells, something impossible to do until very recently. It is also original because of the object of its study: cells from part of the colon (called intestinal crypts) which have the particularity of all coming from the same stem cell, making it possible to precisely calculate the number of mutations they contain. . But, above all, it is new because of its findings, which may have implications for some of the fundamental questions about human health and other living beings.

If it only depended on the number of cells, a mouse would never develop a tumor… and all whales would be expected to die of colon cancer before the age of 30, simply because of their size

Adrián Báez-Ortega, researcher at the Wellcome Sanger Institute and co-author of the study

The main finding is that the number of mutations per year or the mutation rate is adjusted to the life expectancy of each species. Although very heterogeneous, this rate is inversely proportional to longevity. So while humans, with their lifespan of around 80 years, have an annual rate of 47 mutations in cells in each intestinal crypt, mice, with a survival rate of only two years, suffer 796. At the end of their life, all the animals studied have accumulated a similar number of mutations. In addition, the researchers found that three of the main mutagenesis processes identified, such as the substitution of one base for another in the sequence, are shared between the different species. There is therefore a link between mutation and aging. Another very different thing is how this connection works.

Adrián Báez-Ortega is a researcher at the Wellcome Sanger Institute and, together with Alex Cagan, is the lead author of this research. He warns of the link between somatic cell mutations and the aging process of organisms. “First, because we don’t have the data to extend the results to other tissues beyond the colon. Second, because we haven’t studied it in other living things that aren’t mammals. More importantly, they do not know the meaning of this relationship. “We found a correlation between lifespan and mutation rate, but we don’t know if the mutation rate evolved to match the animal’s lifespan or if the mutations affect this. life expectancy”, emphasizes the Spanish researcher. Certainly, he says, there are other factors at play as well. For example, cells in the colon accumulate about 50 mutations a year, but suffer thousands of instances of cell damage. This damage also appears to play a role in senescence.

The work confirms one of the most intriguing paradoxes of molecular biology. It was mentioned nearly 50 years ago by British epidemiologist Richard Peto. He observed that species were beyond logic in terms of the risk of suffering from cancer. If tumors are the result of mutations or harmful changes at the cellular level, the more complex the cell, the more tumors there should be. But reality shows that the incidence of cancer in animals does not seem to be related to body mass. This new study confirms the so-called Peto paradox.

“Cancer incidence is similar between species, even though they have mass differences,” notes Báez-Ortega. In general, larger animals tend to live longer. Since all cells have the same chance of developing cancer, the larger the cells, the greater the risk, one might think. But no. “There is a known human cancer incidence curve. If it only depended on the number of cells, a mouse would never develop a tumor, because it has far fewer cells and would not live long enough. In fact, they have an impact similar to ours. And all whales would be expected to die of colon cancer before they turn 30, simply because of their size. But we see that evolutionary pressure has adjusted the rate of cancer, so humans, elephants, and mice have an almost identical curve once you control for their lifespans. And we don’t know why this is happening,” concludes the Spanish scientist.

The evolution of multicellular life requires careful coordination of all cells so that each plays exactly the right role in the organism. Somatic mutations can upset this balance

Íñigo Martincorena, head of research on somatic mutations in healthy and cancerous cells at the Wellcome Sanger Institute

Íñigo Martincorena leads research on somatic mutation in healthy and cancerous cells at the Wellcome Sanger Institute in the UK. He is also lead author of research published in Nature. When it comes to the main findings of the book, he acknowledges how intriguing it is. “The evolution of multicellular life requires careful coordination of all cells so that each plays exactly the right role in the organism. Somatic mutations can upset this balance, as evidenced by the case of cancer, so the evolution of life has necessitated controlling the accumulation of somatic mutations,” he explains in an email exchange. Thus, the finding that the somatic mutation rate per year is much lower in longer-lived species “suggests that [these rates] are under evolutionary control.

Regarding the relationship between mutations and aging, Martincorena insists that senescence does not have a single cause. “The most compelling hypothesis at present is that it is caused by the accumulation of various types of molecular damage in our cells, including somatic mutations, telomere shortening, protein aggregation and changes epigenetics. We believe that these changes at the molecular level cause changes in our cells and tissues that give rise to the typical manifestations of aging. But what is unclear is the contribution of each type of damage.” The results suggest that somatic mutations probably contribute to aging to some extent, but exactly how much and in what way remains to be demonstrated,” adds Martincorena, who concludes by acknowledging the limits of science: “While there is still much to to understand in cancer, in aging our knowledge is still much more primitive.