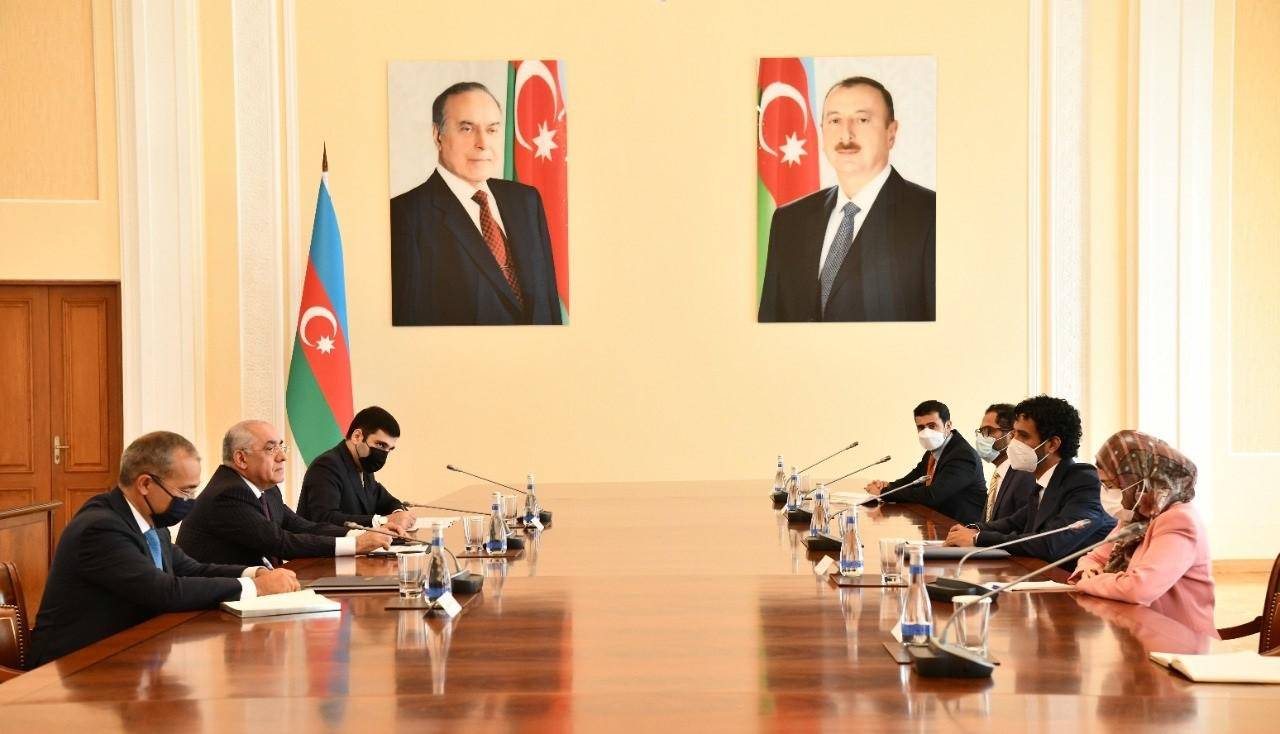 Ilham Aliyev, President of the Republic of Azerbaijan, recently received Abdulla Bin Touq Al Marri, Minister of Economy of the United Arab Emirates, and the accompanying delegation to Baku, where the two sides discussed bilateral relations between the two countries.

The visit of the UAE delegation to Azerbaijan aimed to finalize new joint action plans in the next phase to increase trade and investment flows between the two countries, thereby strengthening economic partnerships. strategic. During the visit, talks were held between Bin Touk and Ali Asadov, Prime Minister of Azerbaijan; Mikael Jabarov, Azerbaijani Minister of Economy; Rashad Nabiyev, Azerbaijani Minister of Transport, Communications and Advanced Technologies; and representatives of the Azerbaijani business sector.

President Aliyev expressed his satisfaction with the current state of relations between the two countries and his desire to strengthen ties of economic cooperation with the United Arab Emirates. He called for the deepening of strategic partnerships over the next 10 years through the creation of new investment opportunities by focusing on several vital sectors such as infrastructure, investments in renewable energy logistics transport and tourism. .

During the meeting, Bin Touq said: “Azerbaijan is a friendly country, a major economic partner of the UAE in the region and a popular destination for UAE citizens to travel, sightsee, study. and engage in business activities and investment.The United Arab Emirates government wishes to continue working closely with our Azerbaijani partners to develop cooperation in various sectors which offer promising opportunities for the future.

In another meeting, Bin Touk discussed ways to develop UAE-Azerbaijan relations with Ali Asadov, and explored the prospects of supporting and developing them through the optimal use of promising potentials and opportunities available to both parties, in the framework of fruitful cooperation. in various fields, in particular new and emerging sectors.

Asadov said: “We see promising opportunities to strengthen the partnership with the UAE at government and private levels, making the best use of the promising potentials and opportunities available on both sides. fruitful cooperation in various vital areas. of common interest, in particular the fourth industrial revolution and artificial intelligence, e-commerce and food safety. We will work to raise the effective partnerships between the two countries to a new level of excellence to serve the development aspirations of both countries. ”

In turn, Bin Touq said, “Relations between UAE and Azerbaijan are making rapid progress in various fields, especially on the economic and trade front. This provides a solid basis for strengthening joint action between the UAE and Azerbaijani governments to further increase levels of cooperation and economic integration.

During Bin Touq’s meeting with Mikhail Jabarov, the two sides agreed to adopt joint practical measures to facilitate and increase the movement of trade, create new investment opportunities for the private sector in the two countries. In addition, companies will be encouraged to explore new horizons of partnership and take advantage of promising opportunities in their respective markets.

Jabarov appreciated Bin Touq’s response to the invitation to visit Azerbaijan to establish future plans to increase investment between the two friendly countries. He highlighted the importance of Azerbaijan’s participation in Expo 2020 Dubai and the success of its related activities so far.

The total volume of non-oil trade between UAE and Azerbaijan in the first nine months of 2020 amounted to over 1.2 billion dirhams. The UAE is Azerbaijan’s largest trading partner in the Gulf Cooperation Council, as it accounts for 76 percent of Azerbaijan’s trade with GCC countries. The two countries also have active relations in the field of tourism, with the United Arab Emirates ranking sixth in the world in terms of the number of tourists who have visited Azerbaijan, according to 2019 data, which numbered over 70,000 tourists.

In the field of investments, the value of Emirati investments in Azerbaijan in 2019 amounted to $ 2.2 billion through projects in the sectors of energy, transport, metallurgical industries, technological solutions, food industry, logistics and others. Meanwhile, Azerbaijan has invested more than $ 350 million in UAE markets across several sectors, including real estate, wholesale and retail, and scientific and technical activities.