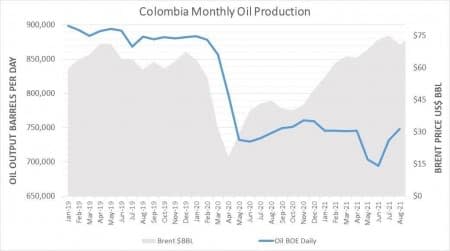 The past year has been extremely painful for Colombia’s economically crucial oil industry with investments plunging to $ 2.05 billion, its lowest level since 2016, while oil production hit all-time lows. for over a decade. This, coupled with the fallout from the pandemic, has severely affected the Colombian economy, causing its gross domestic product to drop nearly 7%, the worst performance in modern times. Despite the emphasis placed by the national government on the reactivation of the petroleum industry which is an essential element for the return of the economy to growth, with it responsible for a third of exports and more than 3% of the GDP , there are signs that operations are faltering.

Source: Colombian Ministry of Mines and Energy and US EIA.

This production is well below the million barrels of crude oil per day targeted by Bogota during the last oil boom, which was considered the optimal production required to achieve the desired level of economic growth.

For the eight months ending August 31, 2021, Colombia pumped an average of 732,234 barrels of oil per day, 1.1 million cubic feet of natural gas and a total hydrocarbon production of 915,145 barrels of oil equivalent . In the case of crude oil and total hydrocarbon production, these figures are respectively 6% and 5% lower than in 2020, which is of great concern as last year was abnormal due to the impact of the pandemic.

These figures indicate that Colombia’s economically crucial oil industry is struggling to reactivate and reach pre-pandemic production levels. This is even more evident when examining the number of Colombia’s drilling rigs, which is a credible proxy measure of activity in the Andean country’s oil industry. The latest figures from Baker Hughes show that there were 21 active drilling rigs in Colombia at the end of September 2021, one more than a month before and nine more than the equivalent period a year earlier, but eight fewer than in September 2019.

Source: Baker Hughes and US EIA.

While the volume of active drilling rigs is steadily increasing, it is still significantly lower than the number before the pandemic, indicating that the reactivation of the oil industry is not happening as quickly as desired.

The escalation in rural violence that has occurred since President Ivan Duque won the country’s top post in 2018, combined with anti-government protests three months earlier this year, is one of the main reasons the moderate recovery of the industry. The massacres, many of which occur in remote rural areas with little government presence, totaled 72 for the first nine months of 2021, six more than the 66 incidents reported for 2020 and double the 36 massacres recorded in 2019. Anti-government protests, sparked by a clumsy attempt to raise taxes, saw major road blockages plunging crude oil production to a multi-year low of 655,068 barrels (Spanish) per day.

Violence remains a persistent problem in many rural areas where Colombian oil fields are located, sparked by conflicts between illegal non-state armed groups seeking to control the lucrative cocaine trade. Some of Colombia’s most productive oil fields and much of the conflict-torn country’s potential oil resources lie in areas that are hotspots for coca cultivation, drug trafficking and violence between criminal groups. . This is amplified by the political, economic and humanitarian crisis in Venezuela, which, along with the rapid collapse of the state, has created ideal conditions for various guerrilla and criminal groups to expand their operations. There are signs that the social license of the Colombian oil industry is deteriorating. Aside from nationwide anti-government protests earlier this year, there have been a series of incidents where local communities have blocked and even overrun oil fields, forcing operations to shut down. The intensification of conflicts as well as the increase in security and geopolitical risks have a significant deterrent effect on the investments of foreign energy companies. These risks are exacerbated by the uncertainty created by the growing possibility that left-wing Senator Gustavo Petro could win the 2022 presidential election. The senator has made it clear that he opposes the exploitation of raw materials to support the Colombia’s economic growth and that it would prepare to shut down coal mines while phasing out the oil industry.

Declining investment in onshore exploration and production activities weighs on Colombia’s ability to increase its proven crude oil reserves, which, at 1.8 billion barrels, will last only six years at the current rate of production. A similar crisis is developing over Colombia’s proven reserves of natural gas which, at 2.9 trillion cubic feet, will last just under eight years. When considering that oil is Colombia’s largest export, accounting for nearly a third of all exports by value for the first eight months of 2021 and a key source of tax revenue, proven oil reserves must be urgently increased. This will only happen if there is a significant increase in investment by foreign energy companies in Colombia’s besieged but economically crucial hydrocarbon sector.

The Energy Ministry encourages foreign energy investment off the coast of Colombia, where it is believed that there are significant oil and gas resources to be discovered without the risks involved in operations on land. Anadarko Colombia, a subsidiary of Occidental Petroleum, signed exploration and production contracts earlier this month for four offshore blocks totaling 3.9 million acres in the Sinu and Guajira offshore basins. The blocks, composed of COL-1, COL-2, COL-6 and COL-7, were previously evaluated under technical evaluation agreements. Occidental, which sold its Colombian onshore oil assets in October 2020, is expected to invest $ 1.4 billion in exploration and development of the blocks. Colombia has chosen to postpone its latest tender for oil and natural gas, pushing back the deadline for expressions of interest to October 15 from September 30, 2021. Bogota took the decision in an attempt to spark a additional interest due to higher crude oil prices with international The benchmark Brent index is selling at $ 84 a barrel, which is a notable gain of 67% since the start of 2021.

By Matthew Smith for Oil Octobers

Read this article on OilPrice.com