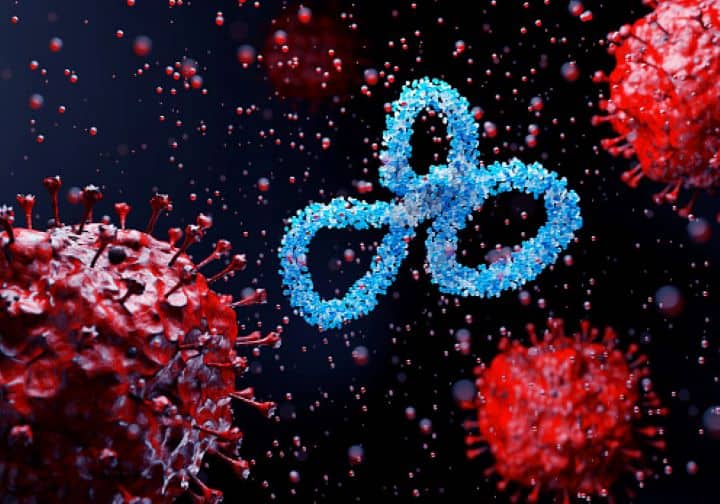 Here are some of the top global Covid-19 research shared last week.

A new study led by researchers from the Vaccine Research Institute (VRI), CEA and Université Paris-Saclay highlights the efficacy in clinical trials shown by a new vaccine they are working on and explains how it works. The study was published in the Natural Communications Journal.

The vaccine consists of a monoclonal antibody, which is an antibody made by cloning a single white blood cell, and binds to a single substance. The monoclonal antibody stimulates dendritic cells, which are immune cells circulating throughout the body, by binding to a specific protein, resulting in a strong cellular and antibody response. Researchers have demonstrated this in other models of infection. As a candidate vaccine against Covid-19, the antibody must bind to a SARS-CoV-2 protein.

Scientists carried out experiments on convalescent animals (animals that no longer have clinical signs but have not recovered their full function), which had been infected with the SARS-CoV-2 virus six months ago, and studied the ability of their vaccine candidate to induce Covid-19 anti-booster responses using models. They used both vaccinated and unvaccinated animals, as well as control animals free from any previous infection, and found that vaccinated animals showed a better ability to clear the virus in a shorter time, compared to others, when they were newly exposed to the virus by the candidate vaccine. Thus, better protection than natural immunity could be provided by the vaccine candidate.

The vaccine, without adjuvant (a substance that enhances the body’s immune response to a foreign body), restimulates the production of neutralizing antibodies capable of binding to the virus upon reinfection, the study concludes.

Researchers at various universities have found a quick and easy method to measure the immune response of T cells to SARS-CoV-2.

Their study, published in the Journal of Clinical Investigation, explains that in a coordinated immune response against SARS-CoV-2, T cells and antibodies play an important role, and this new method will provide additional help to scientists in surveillance. and the evaluation of T-cell responses in individuals infected with Covid, and also helps them to test and verify the effectiveness of vaccines.

The researchers performed a test, Cytokine Release Assay (CRA), on blood samples from people who had received the Covid-19 vaccine, and those who had recovered from Covid-19. Scientists introduced small fragments of the SARS-CoV-2 spike protein into their samples, in response to which chemical signals called cytokines were released by T cells, making it much easier to detect and quantify these cells. without the use of specialized equipment.

Scientists say the CRA test will help define the correlation between T cells and antibodies by providing protection against SARS-CoV-2, and that this will be beneficial for the development of the Covid-19 vaccine.

A team of doctors and public health experts from the University of California at San Diego wrote a letter to the New England Journal of Medicine, which was published on September 1, 2021, outlining measures of the vaccine’s effectiveness. to Covid-19 mRNA in health workers at UC San Diego Health.

This was particularly around the time when the highly transmissible variant of the Delta virus emerged and the state’s mask tenure ended, allowing fully vaccinated people to go out in public without wearing a mask.

The letter says the effectiveness of the Pfizer and Moderna Covid-19 mRNA vaccines, which received emergency use clearance from the Food and Drug Administration in December 2020, has declined over time. From March to June 2021, the vaccine’s effectiveness against symptomatic infection increased from over 90% to about 65% in July, the authors note.

When the Delta variant is considered, the vaccine’s efficacy against mildly symptomatic disease was considerably lower and decreased within six to eight months of receiving the second dose, according to Francesca Torriani, co-lead author of the ‘study.

With the end of California’s mask tenure and the emergence of the Delta variant in July 2021, more people, belonging to the highly vaccinated population, have been diagnosed with SARS-CoV-2 infection. Co-author Nancy Binkin said these factors led to a dramatic change in vaccine effectiveness from June to July. Another co-author said in the letter that young children infected with Delta, aged five to 11, infect their parents, unlike what has been experienced with other variants.

The letter mentions that infection rates among healthcare workers who had been fully vaccinated in January and February were higher than those who were vaccinated from March to May, indicating that the vaccine’s effectiveness was associated with the passage of the vaccine. time.

Co-lead author Shira Abeles said in the letter that the results underscore the importance of reinstating measures such as indoor masking, intensive testing strategies and the need to increase vaccination rates.

The most accurate way to determine the Delta variant is through whole genome sequencing, as it determines the entire DNA sequence of an organism’s genome at one time. Cases confirmed by this sequencing method were included in this study, making it the first of its kind.

Compared with the Alpha variant, the risk of being admitted to a hospital or being treated for emergency care within 14 days of being infected with Delta was 1.45 times higher.

Dr Gavin Dabrera, one of the lead authors of the study, said most of the people included in the study were not vaccinated, and since the Delta variant accounts for over 98% of Covid-19 cases in the UK, it is essential for people who have not received both doses of the vaccine to get the vaccine as soon as possible.

Since only 1.8 percent of those involved in this study were fully vaccinated, the study primarily tells us about the risk of hospitalization for the unvaccinated or partially vaccinated population. Therefore, it is not possible to statistically decipher from this study, how the risk of hospitalization for vaccinated persons infected with the Alpha and Delta variants, after receiving the two doses, is different from one of the other.

Some of the limitations of this study included the lack of access to patients’ pre-existing health conditions, which affect the risk of serious illness from Covid-19, the authors note.