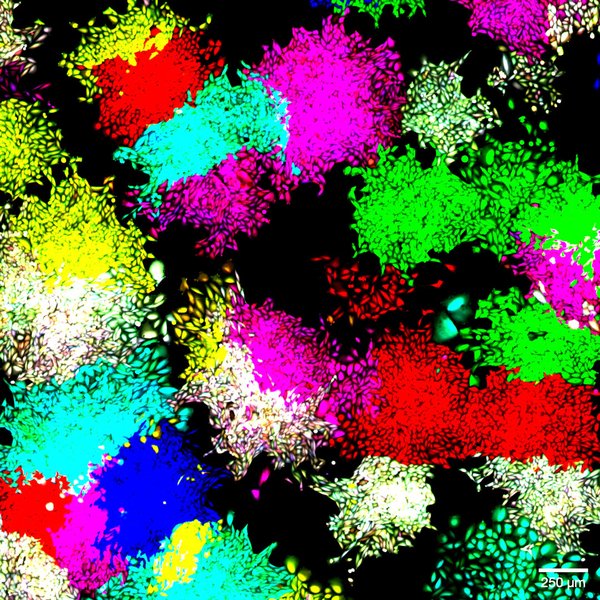 It may seem hard to believe, but each of us started out as a single cell that proliferated into the trillions of cells that make up our bodies. Although each of our cells has exactly the same genetic information, each also performs a specialized function: neurons govern our thoughts and behaviors, for example, while immune cells learn to recognize and fight disease, cells of skin protects us from the outside world, muscles cells allow movement, and so on.

All of these cell types have a common origin as so-called pluripotent stem cells. Full of possibilities, stem cells are like a blank page that can become any type of cell. By analogy, think of how a child grows into an adult and chooses a career and life path. How stem cells choose their careers depends on complex chains of reactions within a cell’s genome (its DNA), called genetic circuits.

Now researchers at the Caltech lab Michael Elowitz, a professor of biology and bioengineering and a researcher at the Howard Hughes Medical Institute, have developed a synthetic genetic circuit that shows how cells can choose their fate. The research is described in an article published in the journal Science January 20.

Using this circuit, which they called MultiFate, the researchers showed how a relatively small set of protein components and interactions is enough to establish and control a greater number of cellular states through a property called “multistability”. . MultiFate now allows researchers to engineer a single living cell that can transform into different states that are each stable but capable of performing a distinct function, analogous to what happens in our own bodies.

Led by graduate student Ronghui Zhu, the researchers designed an artificial gene circuit that could work in lab-grown cells without interfering with normal cellular processes. The MultiFate circuit consists of three genes, each encoding a corresponding transcription factor (a protein that activates gene expression) labeled with a distinctly colored protein: red, green or blue. Each of these three proteins activates by binding to its own DNA. The three types of proteins can also stick together to block each other’s activity.

As predicted by the team’s mathematical model, this type of circuit can allow a cell to exist in up to seven distinct states. Like pixels on a computer screen, each of these states expresses a different combination of red, green, and blue proteins, causing cells to glow in one of seven different hues: red, green, blue, cyan, white, magenta or yellow. . Once in one of these states, the cell remains there unless deliberately disturbed by researchers. Because cells are locked into their fate, a cell passes on its fate (color) to its daughter cells as it grows and divides.

Additionally, unlike natural cellular circuits, which can be difficult to control, the researchers designed MultiFate so that they could induce the cell to switch between the seven states using certain drugs.

“This work shows how designing and building synthetic circuits from scratch can provide insight into fundamental biological phenomena. MultiFate draws on the properties of natural cell fate control circuits, but is designed from the bottom up. Not only does it help explain how cells can exist in so many fates, it could also provide a basis for extending cell therapies to take advantage of multiple cell types to perform more complex therapeutic functions than any single cell type. could provide,” says Elowitz.

The paper is titled “Synthetic Multistability in Mammalian Cells.” Zhu is the first author of the diary. In addition to Zhu and Elowitz, co-authors are Caltech graduate student Jesus M. del Rio-Salgado and Jordi Garcia-Ojalvo of Universitat Pompeu Fabra in Barcelona, ​​Spain. Funding was provided by the Defense Advanced Research Projects Agency, the Allen Discovery Center program, the Paul G. Allen Family Foundation, the Spanish Ministry of Science and Innovation and FEDER, the “Maria de Maeztu” program for units of Excellence in R&D, and the Generalitat of Catalonia. This research was supported by the Allen Discovery Center program under number UWSC10142, a program advised by the Paul G. Allen Frontiers Group of the Paul G. Allen Family Foundation.