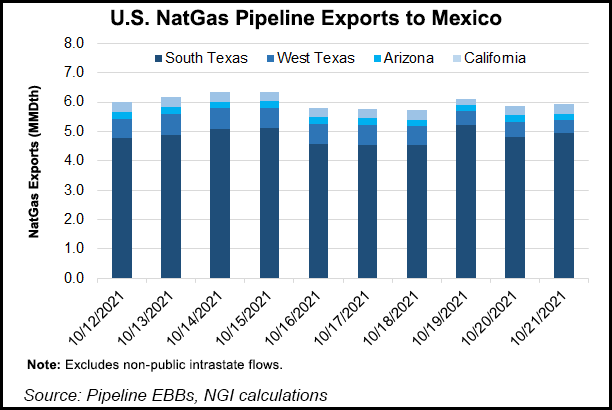 NGI natural gas prices in Monterrey and Los Ramones, near the border with Texas, fell below $ 5.00 / MMBtu for the first time in more than a month. US futures prices for delivery in November and December also fell below the $ 5 mark this week.

Going forward, more price volatility in Mexico is expected as winter approaches in the northern hemisphere.

A Federal Energy Regulatory Commission report predicts a Henry Hub futures price of $ 5.63 / MMBtu for the period November to February 2022, up 103% from the winter 2020-2021 futures price .

Production is slowly picking up in the United States and stagnating in Mexico, and supply concerns are driving record prices in Europe and Asia. According to the Energy Information Agency (EIA), total in-service gas stored in the United States as of Oct. 15 stood at 3,461 billion cubic feet, 151 billion cubic feet below the five-year average. Mexico lacks natural gas storage.

This week saw the start of the earnings season, and major oil companies expect production to pick up from next year. North American exploration and production companies are expected to increase their capital spending by 20% in 2022, Halliburton Co. CEO Jeff Miller said on Tuesday.

Energy policy continues to worry market players in Mexico. A source said Mexico GPI of NGI that at least one potential shipper had decided to stop continuing its marketing activities until there was more clarity on the counter-reform currently being proposed in the country’s Congress.

“Everyone is taking a more cautious stance,” the source said. “We are going back to the situation as it was two decades ago. “

An infrastructure developer said Mexico GPI of NGI that the recent revocation of permits for storage terminals such as Monterra Energy LLC’s fuel terminal in Tuxpan was another sign of a poor working environment for the private sector.

Against this backdrop, this week a bipartisan group of Texas lawmakers called on the Biden administration to intervene on behalf of US energy companies operating in Mexico.

[Get in the know. Access to pipelines, processing plants and LNG facilities is imperative to success in the Mexico natural gas market. Buy NGI’s 2022 Mexico map today.]

The five-day line pack average from Sistrangas in Mexico was 6.918 Bcf / d on Wednesday (October 20), at the sweet spot of the optimum line pack of 6.86-7.29 Bcf needed to ensure sufficient pressure in the system.

In Mexico, NGI natural gas spot prices were down significantly from the previous week, but were rising day by day. Prices rose in the northeast on Wednesday, with Los Ramones up 8.3 cents to $ 4.996. Monterrey rose 8.1 cents to $ 5.890.

Gas injections in the United States

The EIA reported a 92 billion cubic foot injection into natural gas storage for the week ending October 15, slightly above consensus but within range of expectations.