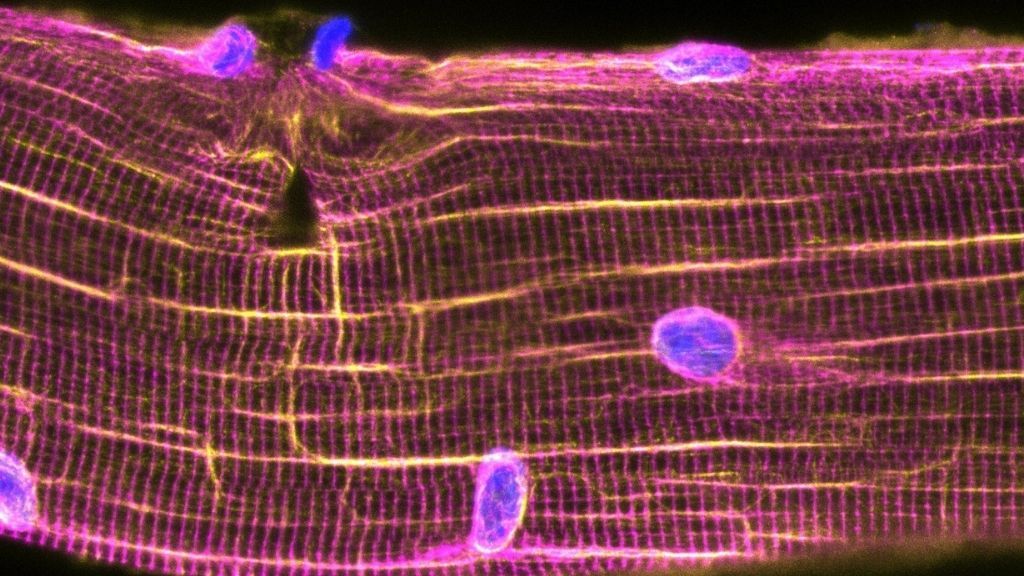 In the new study, published on October 14 in the journal Science, researchers have discovered a previously unknown repair mechanism that is triggered after running on a treadmill. Vivid images show how soon after exercise is over, nuclei rush to tears in muscle fibers and issue commands for new proteins to be built, to seal wounds. This same process is probably taking place in your own cells within hours of returning home from the gym.

The study authors found that “the nuclei moved to the site of injury within 5 hours of injury,” wrote Dr Elizabeth McNally and Alexis Demonbreun, of Northwestern University Feinberg School of Medicine, in a comment, also published in Science. And in just 24 hours after the injury, the repair process was “almost complete.”

Related: Inside life sciences: once upon a time there was a stem cell

Skeletal muscles, which allow voluntary movements such as walking, are made up of many thin tubular cells; these cells are also called “muscle fibers” because of their threadlike appearance. A single muscle can contain hundreds to thousands of muscle fibers, according to the National Cancer Institute. And each fiber contains units of contractile machines, called sarcomeres, which contract and lengthen during exercise.

Eccentric contraction, where your muscles forcibly lengthen as they contract, can cause these sarcomeres to over-stretch. (The second half of a bicep curl, where you slowly lower a dumbbell from shoulder height to your side, and running downhill are examples of this type of exercise.) When the sarcomeres stretch excessively during an eccentric exercise, they can pull on the membrane around them. , causing damage, according to a 2001 study published in the Journal of Physiology.

In these situations, muscle cells rely on a team of skilled cell pits to repair them. Previous studies have have shown that within seconds of the onset of an exercise-induced injury, various proteins form a “cap” on and near the damaged region of the membrane. mitochondria, the so-called powerhouses of the cell, help absorb any excess calcium that has entered the cell through the tear, as the amount of calcium in muscle cells must be controlled for them to function properly.

And now the new study suggests that the nuclei of muscle cells are also rushing to help.

For the study, the researchers placed adult mice on a down-tilted treadmill and then sampled the muscle fibers of the animals after their jogging sessions. In addition, they asked 15 healthy human volunteers to run on a treadmill (about the size of a person) and then biopsy muscle fibers from the vastus lateralis, part of the quadriceps.

They found that in both mouse muscle fibers and human muscle fibers, proteins accumulated around tears in the fibers and formed “scars” within 5 hours of exercise. And in muscle fibers sampled 24 hours after exercise, clusters of nuclei had moved closer to tears, while nuclei appeared further apart in 5-hour samples. To see exactly how the nuclei migrated to the injury sites, the team grew mouse muscle cells in lab dishes and zapped them with lasers, to mimic exercise-induced injuries.

In cells grown in the lab, nuclei assembled around laser lesions within 5 hours and quickly generated nearby protein building “hot spots”. Specifically, the migration of nuclei was followed by a sudden explosion of MRNA molecules, a sort of genetic instruction manual integrated into the nucleus; MRNA essentially copies the encoded blueprints in DNA and transports them into the cell, where new proteins can be built. The newly constructed proteins then help seal and rebuild injured muscle cells.

In the future, medical treatments could potentially be designed to target the molecular pathways that allow nuclei to migrate and initiate this repair process. It could help speed up patients’ recovery from muscle injuries, McNally and Demonbreun wrote in their commentary.

Interestingly, the authors also found that the mice who exercised on the treadmill before the study developed less scarring on their muscle fibers than the mice who had not undergone any prior practice. This matches previous evidence that with constant training, muscles become stronger and less prone to tearing during trained movements, according to the New York Times.