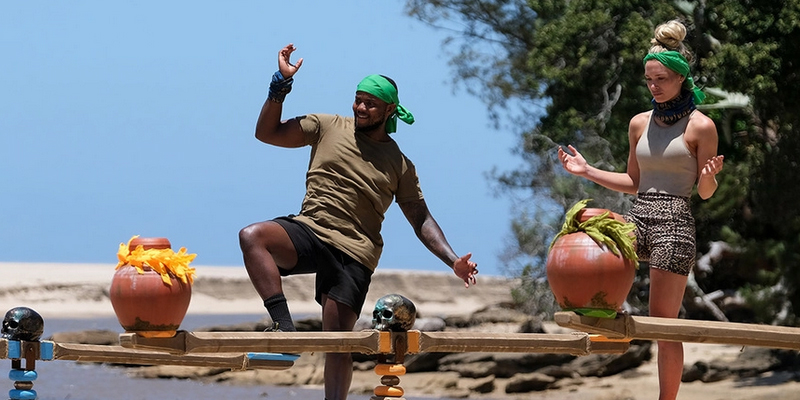 So far, Survivor SA has done a great job managing its benefits with a distribution bold enough to make the most of every opportunity. The success of Immunity Island has been a brilliant achievement this season, an element that has been treated as an additional strategic tool, rather than an obstacle to be cleared. Producers clinched gold with the titular turn of the season and were probably hoping for the same with Tied Destinies.

Sadly, an unlucky draw at a pivotal point in the game didn’t have the same impact, and a slick group of gamers opted for more conservative gameplay.

With 10 players remaining, Tied Destinies was meant to shake up the tribal lines that defined the post-merger. Instead, the twist had the opposite effect, only creating a deeper rift between Vuna and Zamba. When half of the Zamba Alliance became immune, Amy and Renier’s fate was sealed, with little chance of fighting to turn the tide. This twist didn’t spoil an otherwise stellar season, but it definitely sped up OG Zamba’s Pagoning. However, as I’ll explain later, just because this pair missed out on the power shift doesn’t mean we won’t have one soon.

In the last 10, the hierarchy of alliances on Osindile is incredibly obvious to everyone. Kiran, Tyson and Wardah are tight three, OG Zamba is down and without the numbers, and Anesu, Santoni and Chappies hesitate between the two groups. There’s always an idol somewhere on Immunity Island, a fact that Anesu and Chappies plan to take advantage of. The pair plan to issue the next Immunity Challenge to a member of Zamba, who will send one of their own to Immunity Island to retrieve the idol. Their hope is that by doing so, they can break Kiran, Tyson, and Wardah while still maintaining their confidence. It’s a great plan, which would have been great to see unfold. Then just as these ploys can start to come to life, Tied Destinies puts it all on hold.

The Tied Destinies twist is exactly what it sounds like. For this round, everyone will be linked to another player and they will suffer the same fate as their partner. If your partner gains immunity, so do you. If an idol or other advantage is played on your partner, it will also be played for you. More importantly, if your partner is excluded from the game, so are you.

This throws players into a loop, and for good reason. They’ve never had a turn like this in Survivor SA’s history, and it has the potential to completely change a player’s position in the game. This time around, it didn’t happen. Even a random draw of stones couldn’t unite the original Vuna and Zamba, as the pairs are Anela and Nicole, Anesu and Kiran, Chappies and Santoni, Tyson and Wardah, Renier and Amy. In uneventful surprise, everyone is paired with one of their closest allies.

There is potential in the twisting of linked destinies; we just can’t see it here. The random draw of stones ends up giving us pairs which are all closely related to each other. It’s great for Vuna, terrible for Zamba, and the worst for Amy and Renier once Nicole and Anela gain immunity. What if we had mixed Vuna and Zamba pairs? What if known enemies were forced to protect each other? What if you went from a comfortable position in a majority alliance to being linked to the game’s biggest threat? These are all dilemmas we might have seen unfold in Bound Fates but didn’t. Does this go against the expected structure of Survivor? Maybe, but I would still say it was a fascinating opportunity that didn’t work the first time around.

Instead of any of these more intriguing dilemmas, players scramble to take down two enemies at once. Tyson and Wardah are on the chopping block for the Zamba people, in the hopes that the temptation to pull out two of a trio will influence Anesu, Chappies and Santoni. Not everyone agrees with this plan. After confronting Amy over wanting to eliminate another Zamba player, Santoni vowed that Amy and Renier would go here. With both sides hoping to cause serious damage in the future, the challenge of immunity and its consequences dashed any hope Zamba might have had.

Bound Fates drops one more bomb on the cast during the Immunity Challenge. There is no immunity island this turn, which means the idol is off the table as well. Zamba gets a bit of a break when Nicole gains immunity for herself and her partner Anela. While her victory means half of their alliance is safe no matter what, Nicole signs the death warrant for Amy and Renier in the game as the only vulnerable Zamba pair left. She is no longer doing them a favor when she chooses them to join her and Anela for the award at the Wild Waves Waterpark, a choice only Nicole seems to be happy with.

By selecting Amy and Renier as her “obvious” choice for the award, Nicole is making it clear to everyone that the remaining members of OG Zamba are still a core group. In a tour where two people go, this is a terrible fact to point out. It takes precious time for Amy and Renier to plead their case with players who were considering taking the power line off guard. Players like Chappies, Anesu and to a lesser extent Santoni fear losing the upper hand if they vote against two Vunas at once. Thanks to this reward unfolding as it did, those fears are now magnified, severely damaging the chances of a power shift actually happening here.

The only good thing about all Zamba who receive a reward together is that it gives them time to come up with a plan. They hope to sow seeds of distrust with the other side, with Tyson and Wardah’s pair as the primary targets. They immediately get to work once they get back to camp, but it’s hard to say if their arguments make a difference. Amy, Renier and Anela have all done their best with various groups, but unfortunately for them the decision is not theirs.

For an all-about-pairs episode, the real stars of the episode are a duo that weren’t even bonded together this round, Anesu and Chappies. After spending much of their time together maneuvering this vote, Anesu feels close enough to Chappies to reveal her tribal council pass to him, something she has kept a secret from everyone. She won’t be playing the pass tonight, but she described the advantage to him as an insurance that will benefit both of them in the future.

That vote is D-Day (or Decision Day) of Anesu and Chappies for how they want to define their endgames. Whether they take out Renier and Amy or Tyson and Wardah, they are taking a huge risk. In the classic dilemma of playing in the middle, they have to decide which is the best path to take to get to the end.

On the one hand, keeping a trio like Kiran, Tyson, and Wardah for that long is incredibly dangerous, especially with Immunity Island in play. On the other hand, they sacrifice a lot of power by taking out Tyson and Wardah, which would equalize the number of remaining Vuna and Zamba players. They might end up being Renier and Amy’s saviors if they saved them here, but is it worth killing the lead they were working for?

Denier, the superfan that he is, wants to make sure he does everything he can to keep himself safe in tonight’s vote. He works at camp like Amy and Anela, but he really fights to the end. Turns out we don’t need Shaun for the Flaming Tribals, as Renier has him covered this round. After many back and forth between Amy and Wardah over the alliance hierarchy at camp, Renier announces that he has an idol, and if people don’t want to jeopardize their games, they’ll vote for Santoni and Chappies. It’s a brave effort, but he’s immediately stopped by Santoni and Kiran, who call him out on his bluff demanding to see the idol.

Denying pushes back, but that’s not enough for someone to take a real risk in confronting Vuna. OG Zamba players vote for Tyson, everyone votes for Renier, and the driftwood he claimed to be his idol was not good enough to save him. Worse yet, because of the bound fates, Amy’s torch is also extinguished without receiving a single vote against her the entire game. Now the original Zamba has only its last two members left, the trio is still intact and Tied Destinies has come to an end.

Bound Fates was an original twist that had some potential but was not executed. It is impossible to predict a random draw of stones in advance. Still, those results forced our most fluid players to fall back on a more reserved decision so as not to completely upset all of the hard work Vuna did to maintain their majority. It makes sense to them, although it’s devastating to see such solid players like Amy and Renier come out this way. It’s hard to say if this is the only time we’ll see Linked Fates in Survivor SA. There is certainly potential in that kind of twist, but some things just boil down to luck of the draw.

Originally, I was pretty confident we wouldn’t have a post-merge Pagonger this season, but Tied Destinies accelerated the process to just two Zamba’s remaining. While the odds are against Anela and Nicole, it’s no surprise that the preview for the next episode focuses on Anela arguing for a change of power. With 8 players remaining, there are only a few rounds left for those playing in the middle to step up against Kiran, Tyson and Wardah, and they should expect a blindside soon. We still have Immunity Island, an idol and a Tribal Council Pass that will no doubt help the game. For many reasons Anela has been by far the luckiest player this season, so we’ll have to wait and see if the luck. will be on his side again.