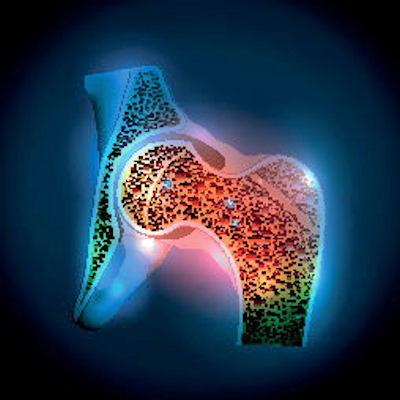 Researchers at Goethe University Frankfurt in Frankfurt am Main, Germany, found that quantitative analysis of bone mineral density on DECT gave an area under the curve (AUC) of 0.937. They believe the technique could allow for retrospective and opportunistic assessment of bone mineral density and allow high-risk patients to be treated before they suffer a fracture associated with osteoporosis.

Osteoporosis is one of the most common metabolic diseases; about 12.6% of the population over 50 is affected by the disease in the United States, according to presenter Leon Grünewald. And about one in three women and one in five men will suffer from a fracture associated with osteoporosis in their lifetime.

At the same time, around 80 million CT exams are performed in the United States each year, and much of the information available in the exams – especially quantitative information – goes unused, he said.

Quantitative CT methods exist, but these techniques typically require calibration on phantoms, he said. However, dual-energy computed tomography makes it easier to acquire data on the breakdown of materials, making it possible to differentiate bone materials and assess bone density and structures without requiring a phantom, said Grünewald.

“So it really is an ideal technology for the assessment of bone mineral density,” he added.

In their study, the researchers sought to determine whether a retrospective and opportunistic evaluation of bone minerals by dual-energy CT scans of the spine can actually predict the risk of osteoporosis or osteoporosis-associated fractures.

“The goal of diagnosing osteoporosis is that you can start treatment before a fracture occurs,” said Grünewald.

The researchers included 92 patients who had received a dual-energy CT scan of the lumbar spine of the first lumbar vertebra. Patients were excluded from the study if they had received an intravenous contrast agent; were suspected of having a malignant tumor of the spine; were suspected or had inflammatory changes, degenerative changes or an L1 fracture; or has had previous spinal surgery.

The study authors used dedicated DECT post-processing software to manually delineate the trabecular bone in two sets of images. Bone mineral density was then extracted from a 3D region of interest.

They then performed a Receptor Functional Characteristics (ROC) analysis to obtain the optimal threshold to differentiate between patients who had an osteoporosis-associated fracture within the next two years and those who had not. The researchers found that the optimal threshold of 93.7 kilograms per meter gave a high level of accuracy, as detailed in the table below.

Grünewald noted that the cutoff is actually higher than the American College of Radiology’s recommendations for quantitative computed tomography. Researchers believe the higher threshold is due to the removal of inaccuracies – such as the fat area – encountered with normal quantitative CT scans. These errors can lead to an underestimation of bone mineral density, he said.

“And bi-energy [CT] effectively eliminated this error, ”said Grünewald. “So I think we’re probably closer to the true value of the bone.

In the future, researchers hope to develop an automated approach for the assessment of bone mineral density, as well as consider the use of contrast-enhanced exams.

“And we’re also looking at locoregional measurements from other areas of the body that might also provide information for an opportunistic assessment of bone mineral density,” said Grünewald.